In light of the fight for healthcare freedom and choice resuming once again in the courts, we recommend all supporters of this case read Executive Director Joanna Baron’s newest article. Published in C2C journal, the article carefully outlines the fundamental issues behind this landmark case.

We know that this has been a very long wait to see this case progress. Since the case is now finally at the Court of Appeal in BC, the pace will be faster than it was when it was at trial.

As we expect the case to ultimately end up at the Supreme Court of Canada, we continue to accept donations to help us pay for this legal action.

Thank you again for the support.

The Canadian Constitution Foundation is looking forward to the appeal of the decision in Cambie Surgeries Corporation v British Columbia (Attorney General), being heard this week at the BC Court of Appeal.

“The trial decision contains errors in both fact and law, and we look forward to this week’s appeal,” said CCF Executive Director, Joanna Baron. “The pandemic has underscored the need for innovative thinking in healthcare. With wait lists worsening across Canada it is crucial that patients are able to make choices about their own healthcare needs.”

In the lower court decision, Justice Steeves found that there was a violation of the security of person for individuals who are suffering from degenerative or deteriorating conditions and waiting for surgery in the government system beyond the medically acceptable wait times. However, Justice Steeves found that the patients had not demonstrated that their suffering was not in accordance with the principles of fundamental justice.

“It is certainly not in accordance with fundamental justice to leave patients suffering on wait lists when there are existing clinics, that have existed for over 20 years, that could treat them,” continued Baron. “The lower court decision is inconsistent with Chaoulli and with existing Charter law on the right to security of person.”

The BC Court of Appeal has granted an injunction that allows Cambie Surgeries Corporation and other private BC clinics to continue to treat patients, as they have done for over 20 years. This means while we await for the appeal for the larger case for greater healthcare freedom and choice next year, patients can continue to access needed care during the ongoing pandemic.

TORONTO: On November 17 and 18, Cambie Surgeries Corporation will be in court fighting for patients’ right to access non-government medical clinics that have served BC patients for over 20 years.

The BC Court of Appeal will hear the injunction arguments in Cambie Surgeries v Attorney General (BC). Cambie Surgeries Corporation will argue that patients have a right to continue to access private surgical and diagnostic clinics while the larger case on the future of private healthcare is appealed.

“It’s hard to believe that in the middle of a global pandemic, the BC government wants to restrict access to healthcare for ideological reasons,” said CCF Litigation Director, Christine Van Geyn. “There are hundreds of surgeries that have been delayed as a result of COVID-19, and these clinics are vital in tackling the backlog of patients who can’t get care in government hospitals,” continued Van Geyn.

This injunction comes on the heels of the trial decision in Cambie Surgeries v Attorney General (BC). The trial judge in that case held that the BC Medicare Protection Act, which denies patients the right to pay for private surgery or obtain private insurance, violates patients’ section 7 Charter right to security of person. However, the trial judge declined to strike down the law because he held that the denial of this right is in accordance with the principles of fundamental justice.

The trial decision is being appealed, and while the parties litigate, Cambie is seeking the ability to continue to treat patients, something they have already been doing in BC for more than 20 years.

“It is hard to understand how it is fundamentally just to leave pediatric patients to suffer unnecessarily when there is another option. Patients should not be sacrificed on the altar of a failed healthcare ideology, and we are confident in our arguments for the appeal,” continued Van Geyn. “While we await the appeal, we want to make sure patients get the best care available. And that means keeping these non-government clinics open for patients.”

The CCF is a registered charity, independent and non-partisan. We defend the constitutional rights and freedoms of Canadians in the courts of law and public opinion. The CCF is supporting Cambie Surgeries Corporation in their litigation.

The fight for healthcare freedom and choice continues. Last Monday, an injunction was filed asking the B.C. Court of Appeal to prevent the province from closing down vital surgical and diagnostic clinics that have been helping BC patients for years. You can read more about this first step in launching the appeal process in the Vancouver Sun. The court documents associated with this legal action can also be found here.

This application follows the trial court decision in this case from September. The judge found that there was a violation of security of the person for individuals who are suffering from degenerative or deteriorating conditions and waiting for surgery in the government system beyond the medically acceptable wait times. However, the judge also found that the patients had not demonstrated that their suffering was not in accordance with the “principles of fundamental justice”. We obviously disagree, and we’re eager to see the Supreme Court of Canada clarify our section 7 rights, and the right of all Canadians to seek out healthcare.

The CCF’s Joanna Baron and Christine Van Geyn had an article recently published in the Lawyer’s Daily discussing a recent Ontario decision pertaining to healthcare with relevance to our ongoing Healthcare Freedom case (aka the Cambie case).

Decisions like Snowbirds — and of course the Supreme Court’s reasons in Chaoulli — illustrate the clear inconsistency of the the recent trial decision in our Healthcare Freedom case with the Charter. In pursuing an appeal for this case, Dr. Brian Day, the patient plaintiffs, the CCF, and all the supporters of greater healthcare choice and freedom, are asking the higher courts to clarify our rights. Canadian governments will be compelled to recognize patients’ right to choose if higher courts overturn the trial court decision and make a ruling consistent with existing section 7 jurisprudence. We look forward to seeking legal clarification of every Canadian’s basic right to seek out healthcare. 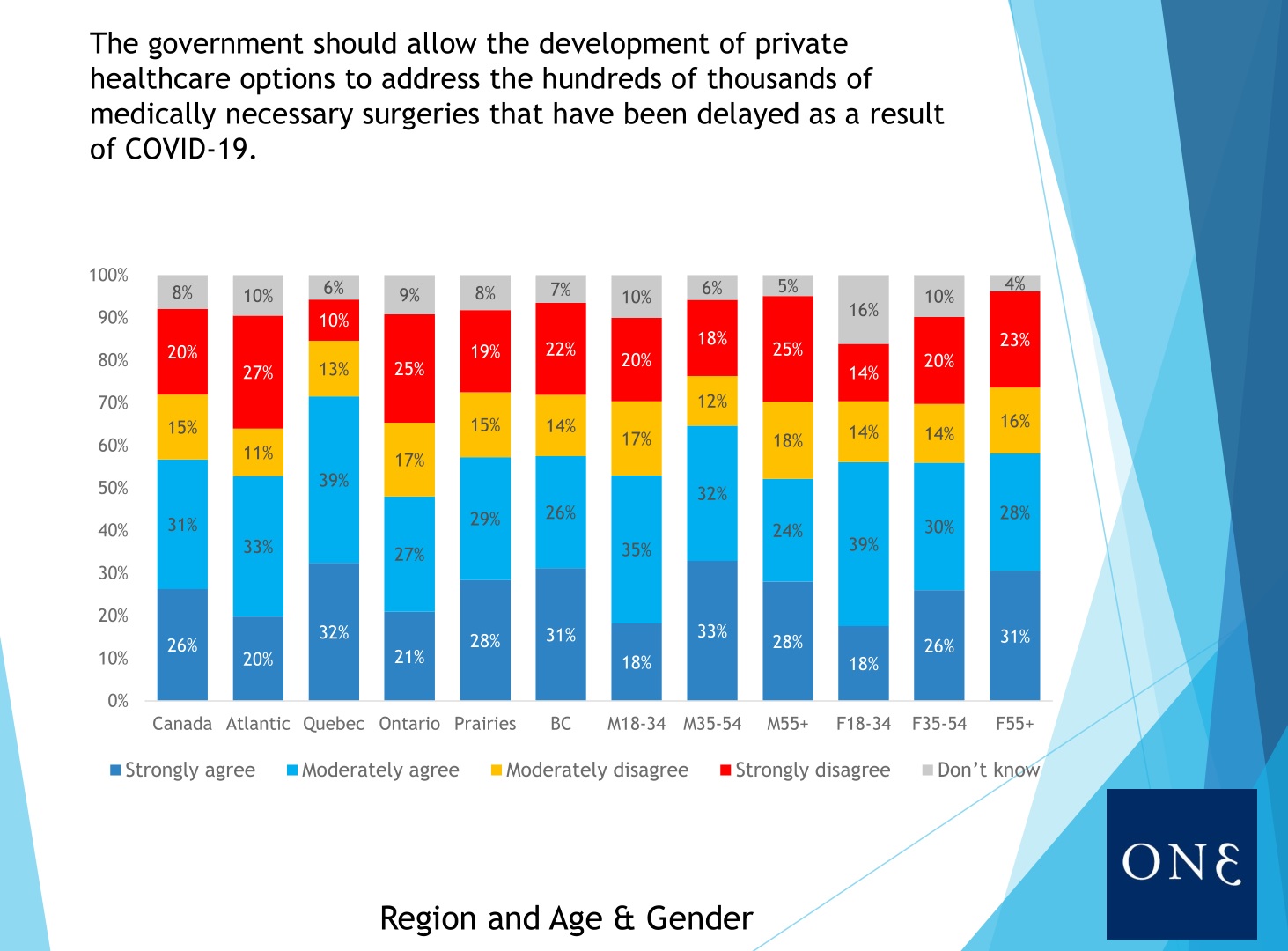 The CCF released results of a national poll this week that show a large amount of support for private healthcare options to deal with the surgical backlog caused by the COVID-19 pandemic.

“Almost every province shows a majority of the population supports the development of private healthcare options to address the hundreds of thousands of medically necessary surgeries that have been delayed as a result of COVID-19,” said CCF Litigation Director, Christine Van Geyn.

VANCOUVER: The Canadian Constitution Foundation (CCF) is looking forward to the appeal of the decision in Cambie Surgeries Corporation v British Columbia (Attorney General). The decision was released by the BC Supreme Court on September 10, 2020.

“The trial decision contains errors in both fact and law, and we look forward to seeing this case appealed,” said CCF Executive Director, Joanna Baron. “We are disappointed in today’s result, which we find completely inconsistent with existing Charter case law and with the Supreme Court of Canada’s decision in Chaoulli.”

In the decision, Justice Steeves found that there was a violation of security of the person for individuals who are suffering from degenerative or deteriorating conditions and waiting for surgery in the government system beyond the medically acceptable wait times. However, Justice Steeves found that the patients had not demonstrated that their suffering was not in accordance with the principles of fundamental justice.

“It is certainly not in accordance with fundamental justice to leave patients suffering on wait lists when there are existing clinics, that have existed for over 20 years, that could treat them. About 75,000 Canadians have died on wait lists since this case was launched in 2009, and this decision will lead to even more suffering. This decision is wrong, and we look forward to the appeal,” concluded Baron.

The CCF supports the plaintiffs in the Cambie litigation, but is not itself a party to the litigation.

In June 2020, the CCF was in the Court of Appeal for British Columbia making oral arguments in favour of disclosing the government’s costs in our Healthcare Freedom case. We believe British Columbians should know how much money their government has spent paying for lawyers to use delay tactic after delay tactic in the hopes of exhausting the patient plaintiffs.

On August 21, 2020, the court ruled that the single global number of this expense is subject to solicitor-client privilege. While we were disappointed by this result and the precedent it sets for government accountability, we look forward to the decision in our main case for healthcare choice expected before the end of 2020.

We need to put patient rights at the centre of any discussion about healthcare. Our Healthcare Freedom case is about getting Canadian governments, first and foremost, to merely recognize that Canadians have a right to seek healthcare outside the public system when that system leaves them waiting and suffering.

Being put on a waiting list is not healthcare, and we need to have a serious conversation about alternative ways of delivering and paying for healthcare in Canada. But any time a conversation about alternatives to government hospitals is started, critics chime in with familiar myths about Canada’s healthcare system. The CCF’s Christine Van Geyn is featured in a new video addressing the five most common myths about about Canada’s government healthcare, and what an independent healthcare system could really mean for patients.

The CCF’s Joanna Baron appeared on Conversations That Matter with Stuart McNish to discuss the Healthcare Freedom case and why this case is so important for the future of Canadians’ health.

No more pages to load