The Canadian Constitution Foundation is challenging the constitutionality of section 91 of the Canada Elections Act (CEA). The CCF is deeply concerned about the harm that this law has on freedom of expression in Canada, particularly the freedom to engage in political speech, as guaranteed under s. 2(b) of the Canadian Charter of Rights and Freedoms. Section 91 of the CEA violates the right of Canadians to express their political views freely, particularly during an election period, without fear of reprisal.

These provisions, which were recently amended, make it an offence to attempt to influence an election by making or publishing certain types of “false” statements about political candidates and other public figures during the election period. The prohibition leaves important words like “false”, “public figure”, and “associated with” undefined. The result is that the law casts an exceedingly broad net and could be used to shut down all manner of political speech that is protected by the Charter.

Violating this law carries a maximum penalty of a $50,000 fine and five years in prison. As a result, the law forces Canadians into an unacceptable choice: they can soft-peddle their expression or self-censor their views in an attempt to avoid saying anything that the state may deem to be “false”, or they can exercise their right to express themselves and risk prosecution and severe punishment. Too many Canadians will choose the former. This chilling effect will lead to a muted social and political discourse and, in turn, serve only to undermine the integrity and effectiveness of the democratic election process.

Inevitably, false information is, intentionally or not, disseminated during an election. The constitutionally permissible response to this inevitability is not to sanction speech, but to promote media and information literacy and foster open discourse so that Canadians can make up their own minds about what to believe and who to vote for. Censoring and punishing free speech is not a constitutionally acceptable solution in a free and democratic society.

Justin Trudeau image by Alex Guibord and is used under CC 2.0. 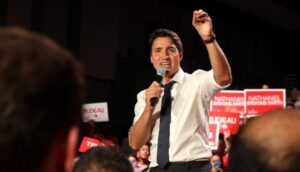