The Canadian Constitution Foundation is proud to announce that it will be intervening in Toronto (City) v. Ontario (Attorney General). The appeal, which will be heard June 10th and 11th, raises the question of whether participating in a municipal election, either as a candidate or as a voter, is protected as “expressive activity” under s. 2(b) of the Charter.

The CCF will argue that the Constitution’s framers chose to protect participation in federal and provincial, but not municipal, elections in s. 3 of the Charter, and that this choice must inform the proper interpretation of s. 2(b). One Charter guarantee cannot legitimately be used as a vehicle to cloak in constitutional protection that which another Charter guarantee has expressly excluded. Courts must be attentive to the internal limits of Charter rights, and not simply rely on the limitations clause (s. 1) to leave it up to judges to decide subjectively, in every case, whether the government has overstepped. This requires a consistent, disciplined approach to constitutional interpretation. Such an approach was lacking in this case, the CCF will argue, and the Court of Appeal will say so.

Read our full release on this intervention here.

Image by Brad Saunders and used under CC 2.0. 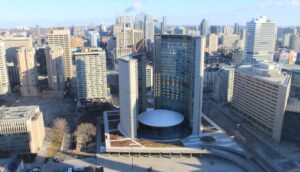