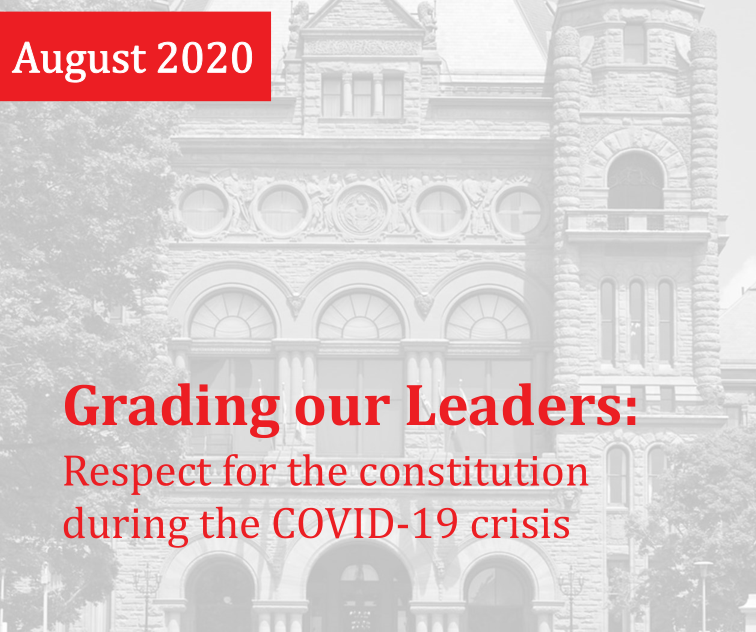 The Canadian Constitution Foundation (CCF) has released a report entitled “Grading our leaders: respect for the constitution during the COVID-19 crisis”. The report assigns a letter grade to each of the provincial premiers and the prime minister, and analyzes select mayors.

“No leader got all As, but some did better than others. Top marks go to Saskatchewan’s Scott Moe and Manitoba Premier Brian Pallister. Newfoundland and Labrador Premier Dwight Ball (who has now left office) ranks in the very bottom with straight Fs,” said CCF Executive Director, Joanna Baron.

Marks were assigned based on how well Canada’s political leaders respected six dimensions of constitutional norms; (1) democracy and rules of law; (2) freedom of assembly and speech; (3) mobility rights; (4) freedom of religion and conscience; (5) life, liberty and security of person, and; (6) privacy rights.

The CCF has been monitoring the government response to the pandemic and has spoken out against unconstitutional provincial border restrictions and advocated for the accommodation of individuals with disabilities who are impacted by mandatory face coverings.

“We will continue to fight for the constitutional freedoms of all people in Canada and hold our political leaders to account when they go too far. Emergencies are where rights are won and lost, and we are proud to play a necessary role in protecting individual liberties and ensuring government strikes the right balance,” said CCF Litigation Director, Christine Van Geyn.

Press Release: Why is the BC Government muzzling Health Minister Terry Lake?